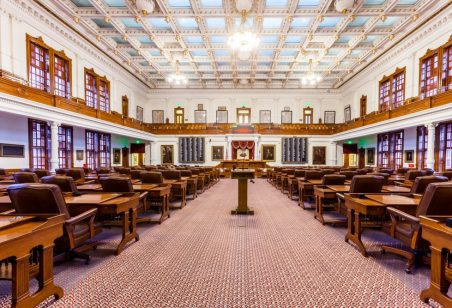 On Thursday April 25, 2019 the Texas House of Representatives will debate and vote on Representative Joe Moody’s HB63 relating to the civil and criminal penalties for possession of certain small amounts of marihuana. HB63 is a bill that would decriminalize under an ounce of marijuana reducing the penalty from a class B misdemeanor (punishable by a maximum of 180 days in jail, with a $2,000 fine) and making it a civil penalty with a $250 fine. This bill eliminates the arrest, bond, and criminal conviction of individuals who posses such a small amount of marijuana.

Earlier this legislative session Attorney David Sloane traveled to the capital in Austin Texas to testify alongside judges, current and former prosecutors, law enforcement, addiction specialist, the ACLU of Texas and many more in favor of HB63. After being voted out of the Criminal Justice committee this bipartisan piece of legislation that currently has 47 legislators who have signed on in support, has been placed on the General State calendar to be debated and voted on by the Texas House.

If the bill passes out of the House of Representative it will still have to be sent to and passed by the Senate, and if passed there, it will then go to the Governor’s desk to either be signed or be vetoed. During a signing ceremony for the Texas Compassionate Use Program, a low THC medical cannabis bill for certain epileptic patients, Governor Abbott made the statement that he was “convinced that Texas should not legalize marijuana… As Governor, I will not allow it.”

HB63 however is not a legalization bill, it is just sensible marijuana policy similar to that which has been seen in other States such as Nebraska, that have decriminalized the drug to keep non-violent offenders out of prison and conserve state resources and tax payer dollars for decades.

HB63 does not offer any legal avenue for access to marijuana; rather it just allows our criminal justice system to clear up resources from spending time on non violent low level marijuana possession. On the campaign trail in 2018, Governor Abbott made the statement “One thing I don’t want to see is jails stockpiled with people who have possession of small amounts of marijuana,” stating that he would be open to seeing low level possession cases reduced from a class B to a class C misdemeanor. HB63 goes a step further with replacing the criminal penalty with a civil penalty thus eliminating the threat of arrest, jail time, and a criminal record.

One thought on “Texas House Set to Vote to Decriminalize Marijuana”