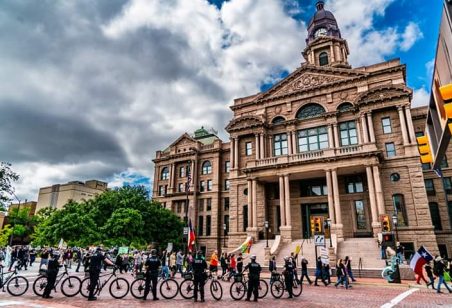 The Law Offices of David Sloane have always been at the forefront of the marijuana reform movement in Texas. We have been defending those arrested for marijuana crimes in the courtroom, advocating for changes to the law in the legislature, and even rallying citizens to take to the streets and call for sensible regulations of cannabis.

Cameron Pinkerton, Office Manager for the Law Offices of David Sloane, was featured on CBS news after he helped organize the DFW Marijuana March in downtown Fort Worth. Pinkerton and the Dallas/Fort Worth Chapter of the National Organization for the Reform of Marijuana Laws (NORML) lead a massive crowd from Burnett Park to the Tarrant County Courthouse, speakers including NORML founder Keith Stroup and David Sloane addressed the crowd.

The peaceful rally came after the Texas House passed House Bill 1365 and sent it to the senate. House Bill 1365 would significantly expand the Texas Compassionate Use Program (TCUP) which currently only allows low-THC cannabis oil or CBD to be prescribed to those with intractable epilepsy. TCUP in its current form is extremely limited and helps only a tiny portion of the population that could benefit from medical marijuana. There are only three facilities in the entire state where those prescribed medical marijuana for intractable epilepsy can even buy the drug.

If HB 1365 is passed by the senate and signed by Governor Greg Abbott, the number of legal dispensaries would quadruple and it would be legal to prescribe medicinal cannabis to more people in need, including those with Alzheimer’s, Crohn’s disease, muscular dystrophy, PTSD, Parkinson’s, ALS, and cancer patients.

Pinkerton and those that marched on the Tarrant County Courthouse certainly want more sweeping marijuana legalization measures, but every step towards sensible regulation is a victory. Pinkerton addressed reporters stating he wants sensible regulation and not over-regulation, “So we’re not getting our medicine from the street. And so we’re not throwing veterans into cages for trying to access a plant that grows in the soil they fought to keep free.”