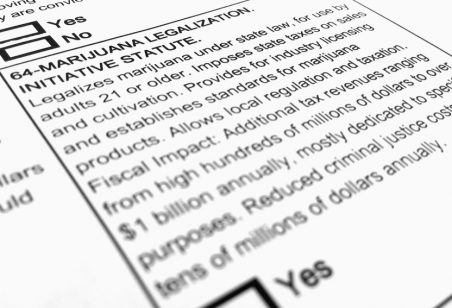 In states like California, the state constitution allows for electors to vote on referenda to become law during general elections. So, for instance, the question of whether marijuana should be legalized was left up to California citizens under California Proposition 64 in 2016. That measure passed with 57% of the vote which is why recreational use of marijuana is now legal in that state.

So why then can we not do the same thing here in Texas and vote for legalization? The short answer is that we actually can, it’s just a much more difficult process. In California a ballot proposition can be placed on the ballot either by the California State Legislature adding it or by a petition signed by registered voters.  A petition in California only needs signatures from 8 percent of those who voted in the last election for governor to put a constitutional amendment on the ballot or 5 percent for a statute.

In Texas it is much harder to get a ballot measure. The only way to do so is for the legislature to vote to put a constitutional amendment on the ballot. This requires a joint resolution from both the Texas State Senate and The Texas House of Representatives. The resolution must then be adopted by a two-thirds vote in both houses. That means at least 100 Texas State Congressmen and 21 Texas State Senators must agree just to have the measure put on the ballot. Only then will Texas voters get to decide on a ballot measure.

Both amendments if adopted by the house and senate would not allow voters to decide on a law legalizing marijuana, however. Instead the ballot measures would only direct the legislature to authorize and create laws governing marijuana use in the state.

We are only at the beginning of the process and it is not clear what options for legalization Texas may produce. In the meantime, Law Offices of David Sloane, PLLC is here to defend you if you are arrested for a marijuana offense and we will keep you updated as things develop.

One thought on “Why Can’t Texas Vote to Legalize Marijuana?”